DO-254 Costs Versus Benefits 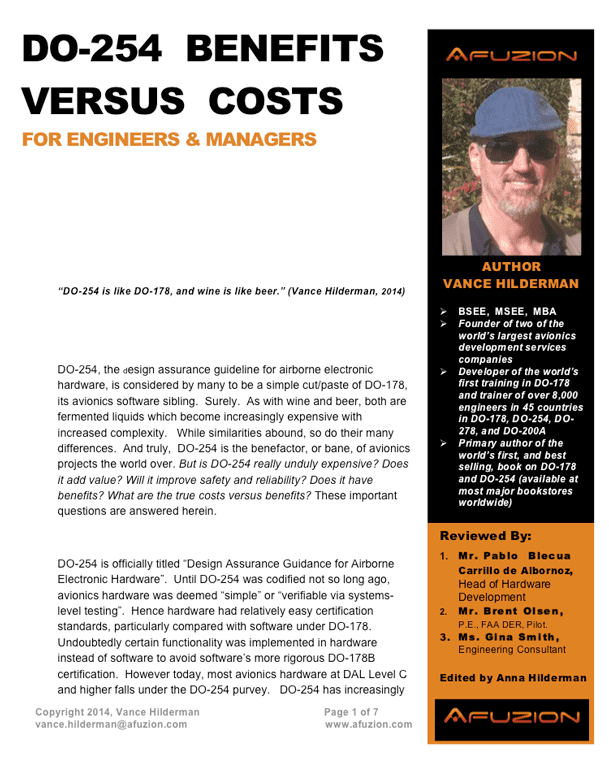 DO-254 Costs Versus Benefits

DO-254 is not cheap, however DO-254 costs can be minimized.  This paper compares DO-254 Costs versus benefits based upon criticality level and avionics hardware experience/culture. Learn how to reduce DO-254 costs while obtaining improved DO-254 certification, quality, and reusability.

DO-254, the design assurance guideline for airborne electronic hardware, is considered by many to be a simple cut/paste of DO-178, its avionics software sibling. Surely. As with wine and beer, both are fermented liquids which become increasingly expensive with increased complexity. While similarities abound, so do their many differences. And truly, DO-254 is the benefactor, or bane, of avionics projects the world over. But is DO-254 really unduly expensive? Does it add value? Will it improve safety and reliability? Does it have benefits? What are the true costs versus benefits? These important questions are answered herein.

DO-254 is officially titled “Design Assurance Guidance for Airborne Electronic Hardware”. Until DO-254 was codified not so long ago, avionics hardware was deemed “simple” or “verifiable via systems-level testing”. Hence hardware had relatively easy certification standards, particularly compared with software under DO-178. Undoubtedly certain functionality was implemented in hardware instead of software to avoid software’s more rigorous DO-178B certification. However today, most avionics hardware at DAL Level C and higher falls under the DO-254 purvey. DO-254 has increasingly evolved into the de-facto standard for commercial avionics hardware, then Military avionics, and now general aerospace electronics. DO-254 requires planning, consistency, determinism, thorough requirements, design, documentation and testing, thorough process assurance, and proof of the preceding attributes. DO-254 relies upon testing to verify and validate avionics quality. But avionics quality for complex items comes from a quality process, design, and implementation, not just testing. Recently, DO-254 is being required on virtually all aircraft including civilian and new military aircraft (i.e. the A400M, one of many aircraft for which the author contributed his skills).

The DO-254 guideline presumes that hardware and software must operate in harmonic unison, each with proven reliability. Remember, before DO-254, hardware was considered “visible” and tested at the systems level with integrated software; hence hardware was exempt from DO-254 quality attributes. But that exemption resulted in functionality being moved from software to hardware for the purpose of avoiding software certification. Also, hardware complexity has evolved such that hardware is often as complex, or more so, than software due to the embedded logic within the Programmable Logic Devices (PLDs), Application Specific Integrated Circuits (ASICs) and Field Programmable Gate Arrays (FPGAs). Now, everyone recognizes that hardware and software comprise an inextricable chain with the quality equal to that of the weakest link. Hence, the mandate to apply DO-254 to avionics hardware. And the weak links are continually removed through the avionics certification evolution.