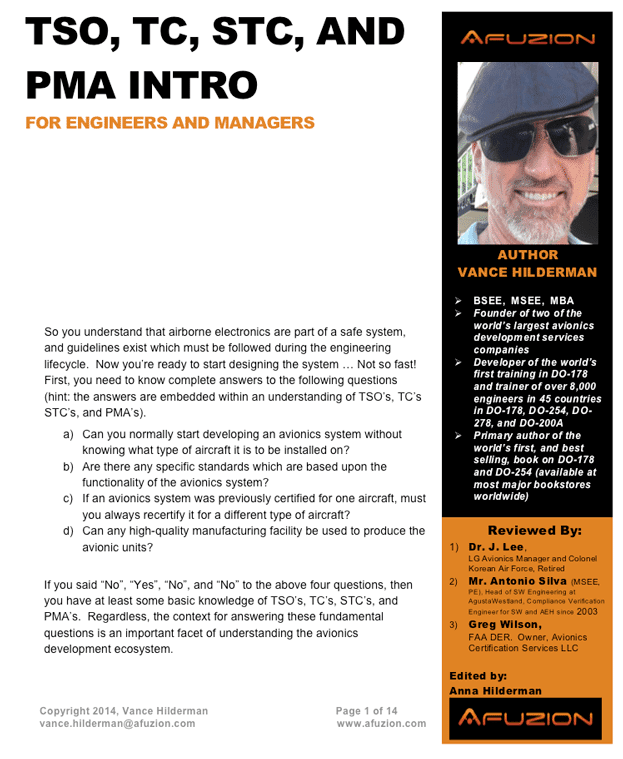 For Engineers & Managers
So you understand that airborne electronics are part of a safe system, and guidelines exist which must be followed during the engineering lifecycle. Now you’re ready to start designing the system … Not so fast! First, you need to know complete answers to the following questions (hint: the answers are embedded within an understanding of TSO’s, TC’s STC’s, and PMA’s).
a) Can you normally start developing an avionics system without knowing what type of aircraft it is to be installed on?
b) Are there any specific standards which are based upon the functionality of the avionics system?
c) If an avionics system was previously certified for one aircraft, must you always re-certify it for a different type of aircraft?
d) Can any high-quality manufacturing facility be used to produce the avionic units?

If you said “No”, “Yes”, “No”, and “No” to the above four questions, then you have at least some basic knowledge of TSO’s, TC’s, STC’s, and PMA’s. Regardless, the context for answering these fundamental questions is an important facet of understanding the avionics development ecosystem.

For commercial avionics, safety of flight is paramount. Perhaps nowhere in the avionics ecosystem is the interdependence of those safety aspects seen via an Airworthiness Pyramid with four building blocks, as depicted below: 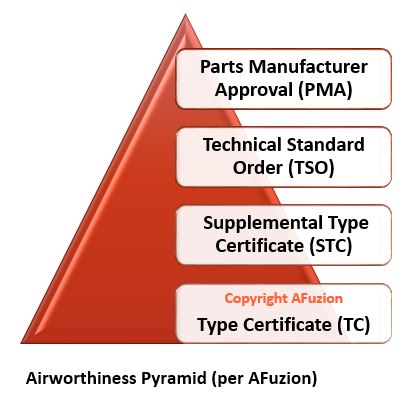 And just like a pyramid, the airworthiness pyramid has a foundation with subsequent blocks placed upon each other.  First, what is “airworthiness”?

The Airworthiness Pyramid thus has the following four building blocks, summarized below with more detailed explanations to follow: 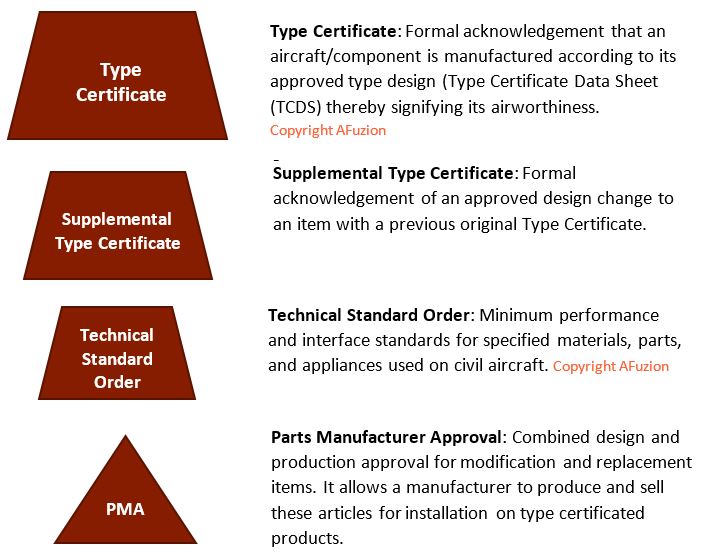 Remember, in avionics development it is all about the “ecosystem”.  Here again is a pictorial view of the key aspects of that ecosystem. Which aspect is most important?   Yes, they all are. Like a chain, the system is only as strong as the weakest link.

First, what is the formal regulatory basis for aircraft and avionics certification?  The fundamentals are contained in Title 14 of the US Code of Federal Regulations (CFR) Aeronautics and Space, Parts:

For the remaining 11 pages of this AFuzion whitepaper, please download freely below: