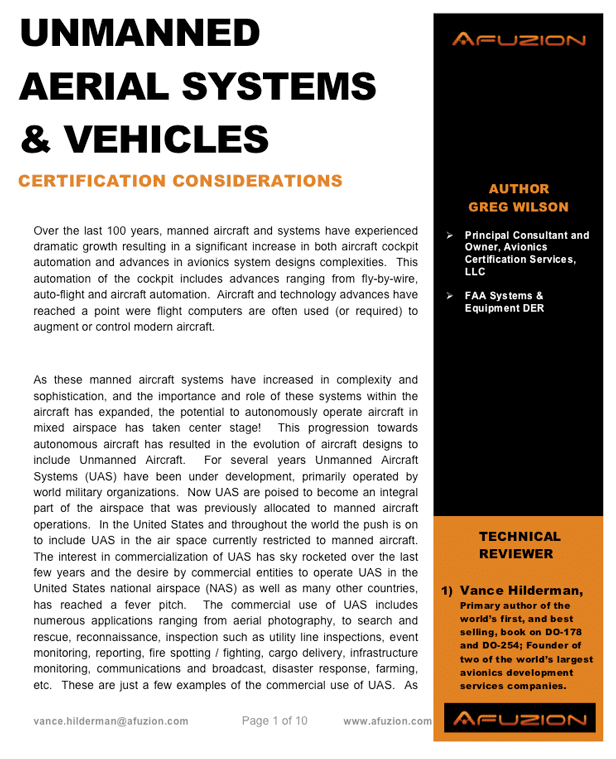 Over the last 100 years, manned aircraft and systems have experienced dramatic growth resulting in a significant increase in both aircraft cockpit automation and advances in avionics system designs complexities. This automation of the cockpit includes advances ranging from fly-by-wire, auto-flight and aircraft automation. Aircraft and technology advances have reached a point were flight computers are often used (or required) to augment or control modern aircraft.

As these manned aircraft systems have increased in complexity and sophistication, and the importance and role of these systems within the aircraft has expanded, the potential to autonomously operate aircraft in mixed airspace has taken center stage! This progression towards autonomous aircraft has resulted in the evolution of aircraft designs to include Unmanned Aircraft. For several years Unmanned Aircraft Systems (UAS) have been under development, primarily operated by world military organizations. Now UAS are poised to become an integral part of the airspace that was previously allocated to manned aircraft operations. In the United States and throughout the world the push is on to include UAS in the air space currently restricted to manned aircraft. The interest in commercialization of UAS has sky rocketed over the last few years and the desire by commercial entities to operate UAS in the United States national airspace (NAS) as well as many other countries, has reached a fever pitch. The commercial use of UAS includes numerous applications ranging from aerial photography, to search and rescue, reconnaissance, inspection such as utility line inspections, event monitoring, reporting, fire spotting / fighting, cargo delivery, infrastructure monitoring, communications and broadcast, disaster response, farming, etc. These are just a few examples of the commercial use of UAS. As UAS are integrated into the NAS many new applications that have not even been thought of as yet will emerge!

When one considers the overall timeline manned aircraft rules and regulations have required, changing these rules and regulations to accommodate UAS operations in the NAS in a relatively short period of time represents a significant challenge. The development of manned aircraft rules and regulations has consistently focused on safety. Airworthiness standards for existing US aircraft are defined in the US government code of federal regulations (CFR), Title 14 CFR, and processes for FAA type certification are defined in FAA Order 8110.4 and airworthiness certification in FAA Order 8130.2. As one would expect, changing these rules and regulations to include UAS in the NAS is a very complex process requiring a significant amount of time and resources. Currently the FAA has not fully established the rules and regulations regarding UAS operations in the NAS, though much progress has made in this endeavor over the past few years. Any entities wishing to design, manufacture, market, or operate a UAS in the NAS must obtain FAA approval for the UAS: the UAV, UAV pilot, and UAV operational environment/plans. Since the existing rules have not been revised as yet to accommodate the unique requirements of UAS, the FAA has developed an interim approach for limited use of UAS in the NAS. The FAA’s primary responsibility is to ensure safe operations of aircraft in the NAS. For type design approval (see the section in this book titled “TC/ STC/ TSO, PMA” for an explanation of Type Design), UAS designers must show they meet acceptable safety levels for the UAS design, and the UAS operators must employ FAA certified systems that enable compliance with standardized air traffic operations including contingency/emergency procedures for UAS. As part of the FAA UAS work, the FAA is expected to harmonize with the international community for the development of civil aviation and UAS operations.