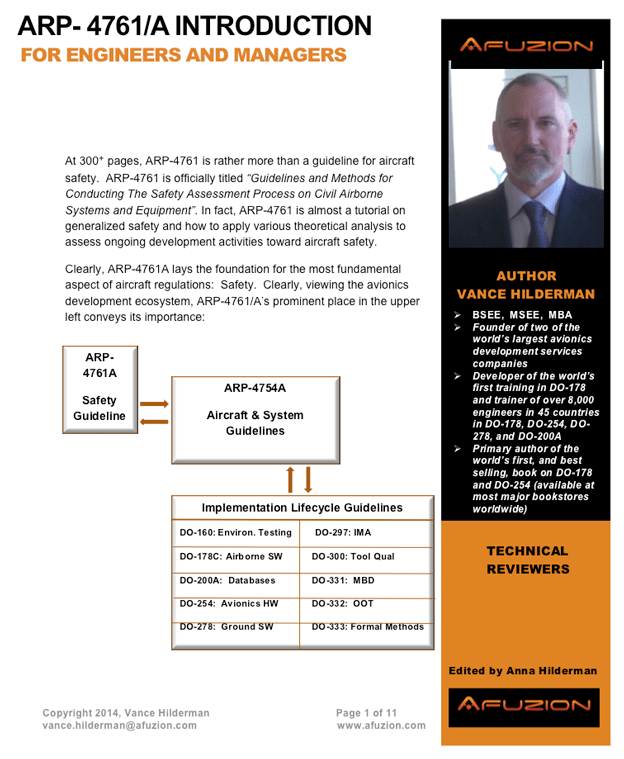 ARP4761 is officially titled “Guidelines and Methods for Conducting The Safety Assessment Process on Civil Airborne Systems and Equipment.” But at 300+ pages, ARP4761 is more than a guideline for aircraft safety. In fact, ARP4761 is almost a tutorial on generalized safety and how to apply various theoretical analyses to assess ongoing development activities toward aircraft safety.

Essentially, aircraft safety is optimized by performing careful analysis, architectural optimization, criticality level determination, component selection, architectural improvement, monitoring, and maintenance. Therefore only by having a thorough safety assessment process can we ensure that we have an architecture with additional safety-related requirements that address safety aspects. The title of ARP4761 accurately justifies its importance within this fundamental process.

ARP4761A is tightly coupled with ARP4754A and lays the foundation for the most fundamental aspect of aircraft regulations: Safety. In the avionics development ecosystem diagram below, ARP4761A’s prominent place in the upper left conveys its importance; FAA certification and EASA certification now mandate ARP4754A plus a safety assessment, typically ARP4761: 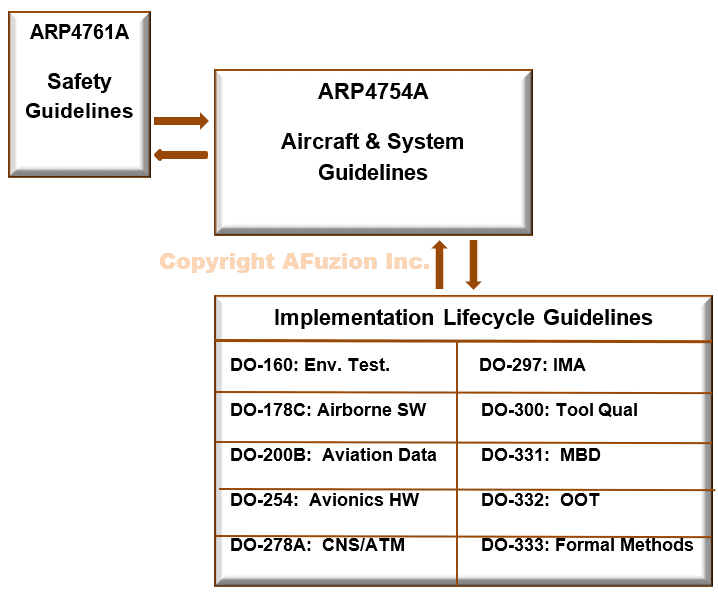 A key to implementing ARP4761 properly is to remember the top-down versus bottom-up nature of ARP4761’s safety assessments as depicted in the following diagram (page 27 of AFuzion’s 240-page ARP4754A per ARP4761A training): 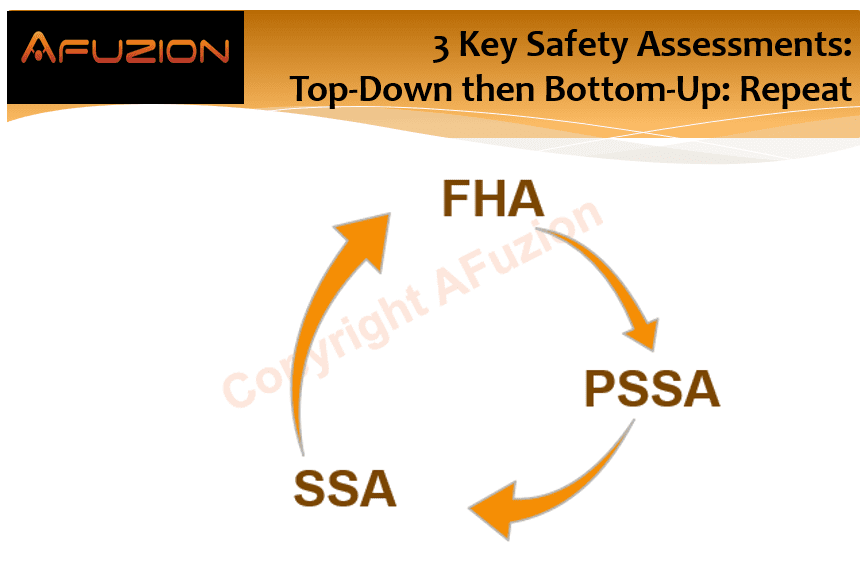 In ARP4761 and ARP4761A, common cause analysis (CCA) is very important. The acceptance of adequate probability of failure conditions is often derived from the assessment of multiple systems based on the assumption that failures are independent. This independence might not exist in the practical sense, and specific studies are necessary to ensure that independence can either be assured or deemed acceptable.

The ARP4761 CCA yields additional safety requirements, which then trace to implementation and tests, including DO-160 environmental tests. The SAE ARP4761 CCA is concerned with events that could lead to a hazardous or catastrophic failure condition. The CCA is divided into three areas of study:

Again, ARP4761A and ARP4754A generally go together as shown below. 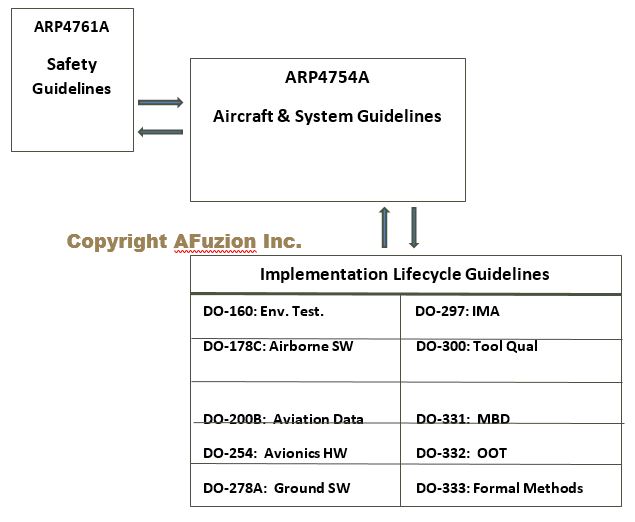 The safety assessment should answer the following questions for the aircraft, then each system, as depicted below: 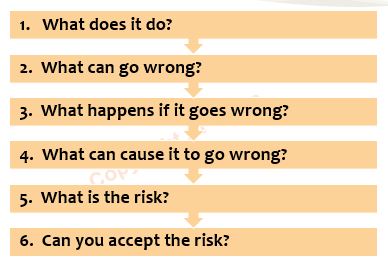 The safety assessment process begins with an overall FHA, followed by a Preliminary Assessment. Both of these are top-down. Then, during and after implementation, the final System Safety Assessment is performed inclusive of Failure Modes and Effects Analysis (FMEA), which is bottom-up. This process is depicted below (excerpted from AFuzion’s ARP4754A training class with ARP4761A Training): 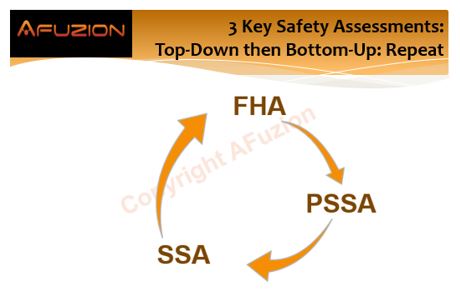 If the information herein were on overall aviation safety, or even aircraft safety, the scope would expand greatly. But the purpose here is purely upon individual avionics systems. The safety assessment process utilizes experienced engineers (versed in the above documents and regulations) to proceed through a series of analyses pertaining to the system and aircraft. As the safety assessment proceeds, the following documentation typically accompanies the various analyses:

The world of ARP4761A safety has its own language and lexicon. Experienced safety engineers are well versed in this language, but you are probably not reading these words if you are an experienced avionics safety engineer. To begin, please ponder the following words and test yourself by verbalizing a 1-2 sentence definition for each word, but please spend just a few minutes pondering these words yourself before looking at the answer.

Note that most aircraft and system developers build or buy ARP4761A Safety planning document templates and checklists; AFuzion’s can be viewed here: https://afuzion.com/plans-checklists/.

Remember, you didn’t learn to drive a car by simply reading the user manual: the real learning came when you practiced driving.

The purpose then of the ARP4761A FHA is summarized in the AFuzion figure below: 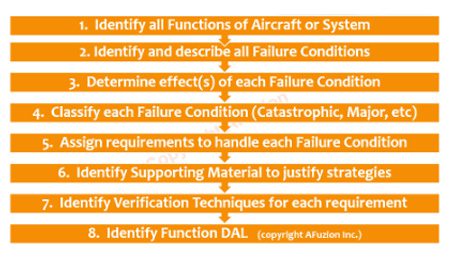 The FHA is much more than a lengthy derivation; the FHA also includes aircraft and system level requirements that allow the objectives for failure probability to be achieved including: 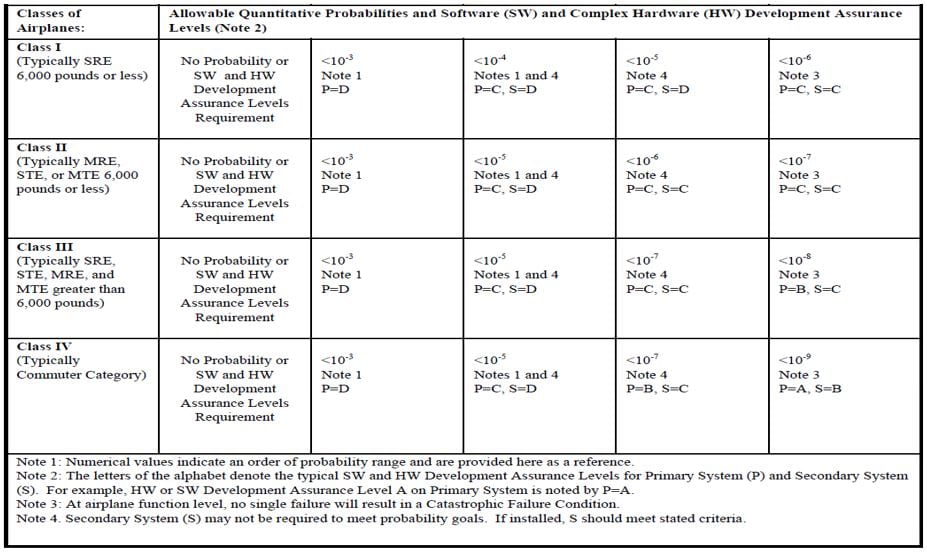 PASA is a systematic examination of a proposed aircraft architecture to determine how failures could cause the Failure Conditions identified by the Aircraft FHA. The PASA process begins during the initial aircraft architecture development phase. Therefore, early identification of aircraft level safety requirements like function development assurance level, independence and probabilistic budgets, etc. helps to reduce risks during the system development process. The PASA is particularly important for evaluating aircraft level failure conditions when multiple systems are involved in performing an aircraft function.

The PSSA is a set of analyses normally performed during the system requirements and item requirements phases of the aircraft life cycle. The PSSA is where the proposed system architectures are evaluated and defined; this provides the ability to derive system and item safety requirements. The input documents to the PSSA are the aircraft FHA, preliminary aircraft FTA, and the system FHAs. The documents produced during the PSSA are the updated aircraft and system FHAs, updated aircraft and systems FTAs, and the preliminary system Common Cause Analyses (CCAs).

The SSA verifies that the implemented aircraft and system designs meet the requirements of the aircraft/system FHA and the PSSA. The SSA documentation generated during the SSA includes:

The following figure shows the ARP4761 FDAL versus IDAL delineation: 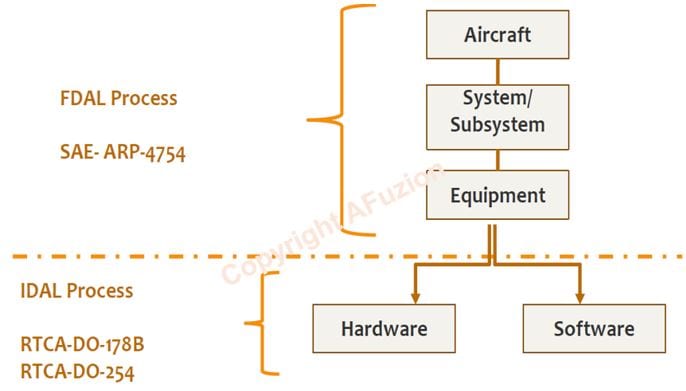 ASA is kind of final assessment that covers results and evidence of safety assessments performed during development process. The ASA basically covers;

Fault Tree Analysis (FTA) is a top-down analysis technique to determine what single failures or combinations of failures can exist at the lower levels that might cause each failure condition.

The primary purpose of an FTA is to determine the probability of occurrence of the top event — therefore, demonstrating compliance with a probability requirement specified in a higher level document (usually an FHA).  Also, the FTA meets additional objectives:

The FTA Basic Events may get their failure rates from the FMEA.

Failure Modes and Effects Analysis (FMEA) is a systematic, bottom-up analysis performed to identify the failure modes of a system, item, or function and determining the effect of the failure on the next higher level.  FMEA’s can be done at the component, function, or LRU level.  Generally, an FMEA deals with the individual and the combined effects of single failures.

At minimum, an FMEA should include the following: 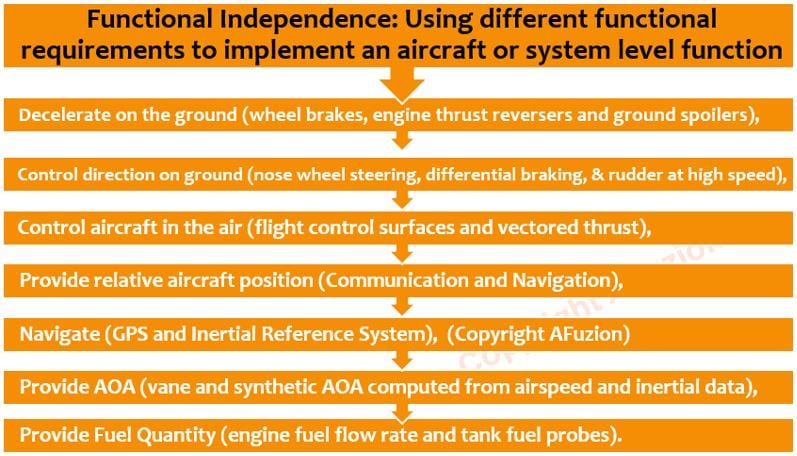 Figure:  ARP4754A and ARP4761 Functional Independence
(for details of Item Independence, download the rest of this ARP4761A PDF whitepaper) 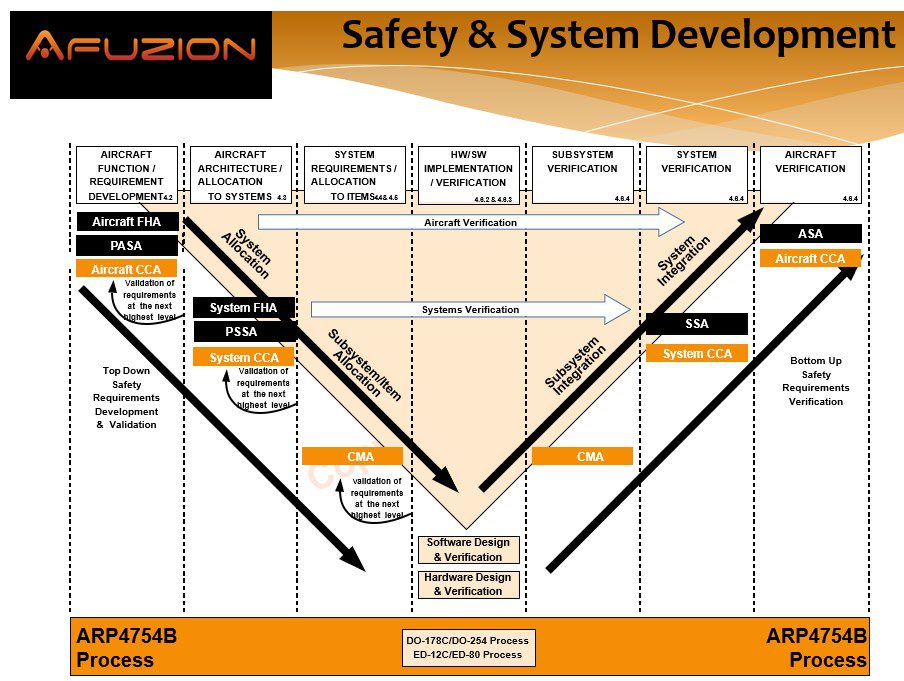 ARP4761 and ARP4761A require a safety process beginning at the Aircraft level and then sequencing through various ARP4761A compliant safety assessments as shown in the following figure: 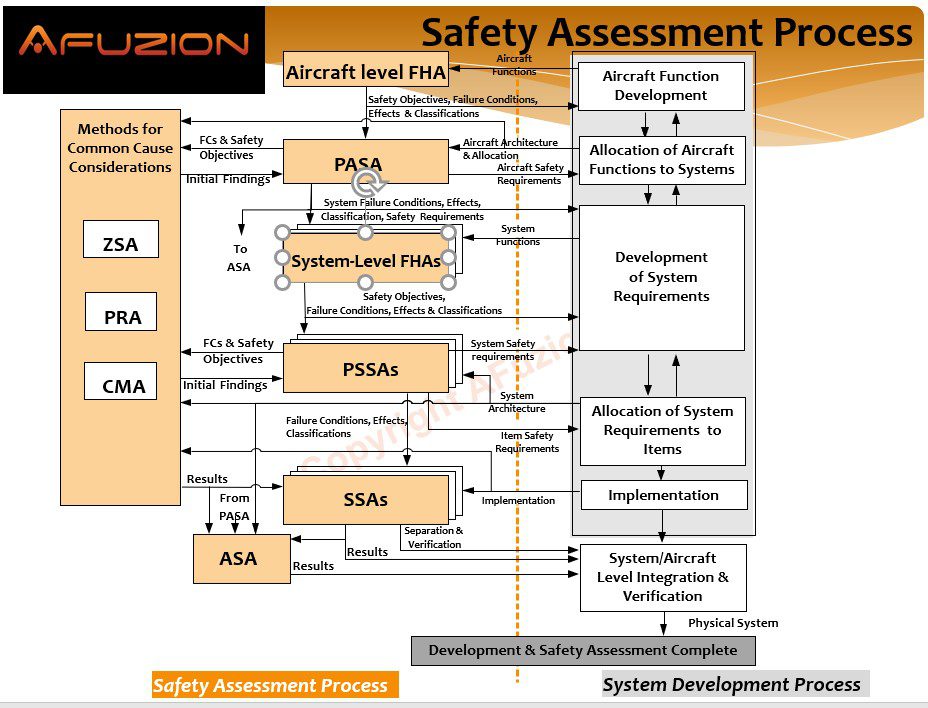 For the remaining 16 pages of this AFuzion ARP4761A Technical Whitepaper, please download below.